Every artist blog needs an image. So when a print you have poured yourself into for weeks does not turn out, it is difficult to know what to do. It is heartbreaking, and a bit embarrassing as well.

During the summer, a nearby lake was drained to repair a leak in the dam. A severe drought helped the process, and by August you could walk on the lake bed and take pictures of these interesting patterns.

I really wanted to use this pattern, but as dry earth, it only conveys lack, desperation and death. Not really the type of image I work with. So I tried to turn it on its head and imagine evaporation, perhaps with some tasty Mediterranean sea salt as a by-product.

To try to get the idea of crystallization, I turned to etching for some interesting textures. I have now remembered why I prefer the dryness of relief printmaking. In this detail, you can see some of the areas that were etched. I actually etched the block three times, and found it to be a very random process. The changeable autumn weather played havoc with the experiment as well. Sometimes the etch dried quickly, and other times it stayed hydrated and ran off the block — and under the tape I had applied to protect the MDF (medium density fiberboard) block.

As I was cleaning off the block the last time, the MDF was beginning to expand and decompose. I knew this was the last time I could print with this block, and there were still many problems to be solved. So I pulled out all the stops — a frisket for some details, and two different gradations. I gently eased the block back and forth from press to table, but in the end there were perspective problems that had been there from the beginning, and couldn’t be solved with another layer of color.

I thought long and hard about whether to put the whole print on the blog, and decided against it. Once it is here, it has a life of its own. At my house, it glares at me as it dries in the studio. We need some time apart, this print and I.

Time to head to Starbucks for a ridiculously expense coffee, sketchbook in hand, to try to regain my artist inspiration. You can’t always get what you want, but if you try sometimes, you just might find you can stuff it in a bottom drawer.

I love relief printmaking. I don’t have a desire to do other media — to paint or to sculpt. But sometimes I crave the textural effects that you can only get with an aquatint. Aquatint is an etching process where tiny pieces of rosin (pine resin) are deposited on a block and then heat-fused. Then the plate (usually copper) is placed in acid, and the places that lack the rosin are etched away.

This technique makes luscious gradations and textures, and I try to create similar effects with my dremmel and many layers of ink. There is a method of etching linoleum, and last spring I gave it a try. I’m posting my results below, and am going to use the etching in my latest work.  But first, an explanation about etching linoleum: 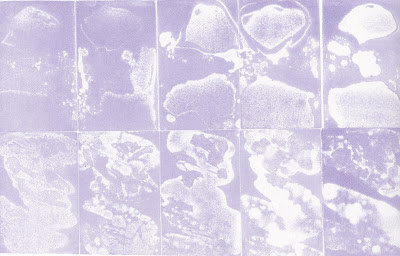 I used ten small blocks, and sealed the MDF with polyurethane. The best instructions for mixing the etching solution are from Warepuke Studios in New Zealand. You are using drain cleaner and creating a caustic solution, so do this outside with goggles, chemical resistant gloves and respirator.

The blocks were exposed for different time intervals. From the left (for both the top and bottom blocks), these were 30 min, 1 hour, 2 hours, 4 hours and 8 hours.

To further my experiment, I used several resist techniques. Running in vertical rows these four techniques were:

Bottom block
3) The etch over dried PVA glue
4) The etch mixed with acrylic self-leveling gel (supposed to make the etch easier to control.) I found this seized up like mozzarella cheese.

My personal preference in all of these is the second area down — the etching solution only. The two hour time period made nice textures, without completely etching the area. If the area is completely etched, it is as if you had carved it away.

In my next post I will reveal the block that I will be etching — entitled Perspectives of Plenty.