I took a break from my studio routine recently to visit the Indianapolis Museum of Art’s exhibit entitled Gustave Baumann: German Craftsman — American Artist. Baumann actually began his career printing the landscape right near where I live. He joined painter T.C. Steele in Brown County, Indiana carving and printing the hills, forests, fields and quaint rural buildings. Baumann’s relocations and travels truly informed his work — from the browns and oranges of a midwestern fall, to the blues and purples of the Pacific Ocean.

Each period in Baumann’s career was covered extensively in this exhibit. I was most drawn to some of his later work from the mountain west, where he uses brilliant greens, yellows and purples in dramatic ways. Baumann used multiple blocks to create his imagery, and the resulting color combinations are spectacular. It makes me wonder if I should use a few more blocks!

Baumann thought of himself as a craftsperson. His studio was his workshop, and he placed great emphasis not only on the carving but also the sharpening of tools and the mixing of his pigments. He was a business person who continually considered the salability of his work. He left his large press when he moved west, convinced that a smaller print size would be more appropriate for most households.

Baumann actually recarved some of his blocks and reissued some series! He simply added “RC” in his numbering scheme and printed a new run. He also changed his chop mark at different times in his career. 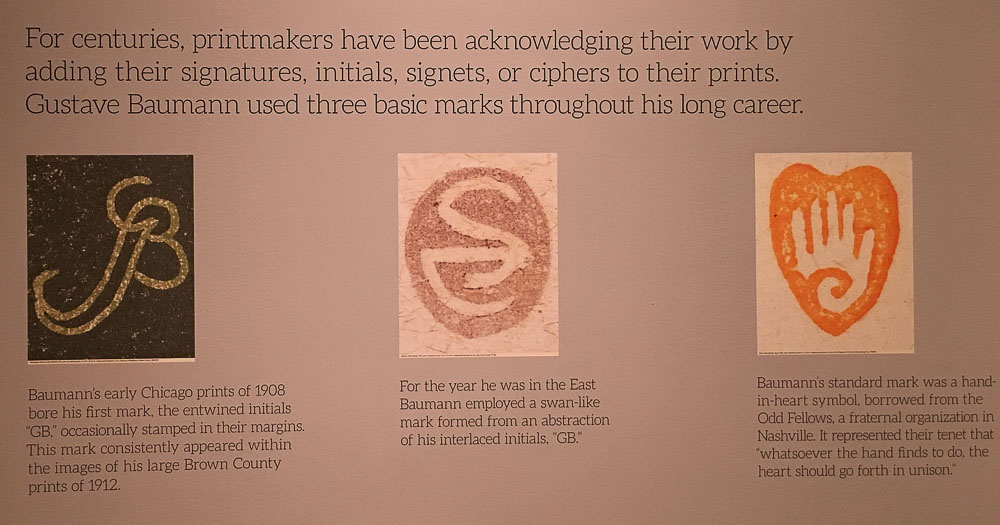 Finally, Baumann followed the Art Deco trends by offering a few of his woodblock prints with metal leaf. I found this optional decorating fascinating.

Would you like your woodblock print with metallic leaf…or not?

The exhibit runs through February 14th and also has some printmaking demonstrations by Indianapolis printmaker Leslie Dolin. Check the website for workshops times and availability.